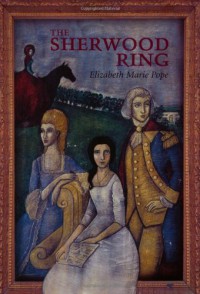 For years I was convinced I had read this book. Then I saw the plot description of an orphaned girl sent to live with her eccentric uncle -- not what I was remembering at all! Eventually I tracked down a copy and began to read it. Soon I began to suspect that I had indeed read it before, and two thirds of the way through -- Barbara's story -- it was confirmed. This was the book I had been thinking I had read! Only it consists of 5 interlinked stories, only the third of which was memorable to me.

Peggy, the unfortunate lass of the frame narrative, was an unwanted daughter and niece. Her docility and inertness are realistic for someone who has spent her childhood trying to be as inconspicuous and obedient as possible. However, this didn't make her very interesting as a character and I forgot her. Anyway, as she droops alone and neglected in the family library, the ghosts of four of her ancestors show up and tell her stories about their exploits during the Revolutionary war.

My favorite story still is the one I remembered for so many years. Barbara Grahame's father and brother join the independence efforts and send her to stay with her awful, hypochondriac old aunt, who does nothing but bully and abuse her. Her brother is stationed nearby for Christmas but the aunt forbids her to leave. Fed up, she sneaks out and makes her way through the woods. Instead of her brother, she encounters a band of loyalists led by a British officer. Rather than merely escaping, she is determined to capture the man her brother has been after for months.

I think one reason I liked Barbara's story best is that she is the only woman who does anything other than pine and get married. This book was written in the 1950s and is not exactly avant garde in its gender sensibilities. Did women ever really think it was romantic for men to remark on their eventual marriage as a given, without asking? Well, I've seen that in later romance novels as well, so guess some must. I was most bothered in regards to Peggy, because isn't she a teen here? And she's been so crushed and unloved all her life it seemed unhealthy...

But anyway, happily ever after for all concerned, as far as we know.
Tweet