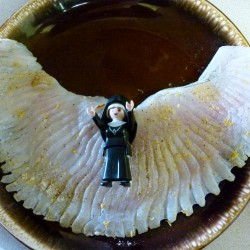 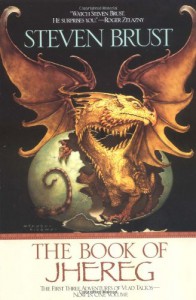 Oh, authors, why can you not just write the stories in the order they occur?

I've read all the books in this series at least once and never got the order of events straight. I'm starting to suspect that the internal chronology doesn't make sense and Brust is trying to disguise the fact.

And the fact that the books all have similar made-up-animal titles does not help me keep them straight.

Having finished my reread on Jhereg, I want to reiterate that the question of order is a fairly important one with this series. Reading in roughly chronological order, as I did the first time through, one encounters the protagonist Vlad as a young man embarking on a criminal career, in part because he is a member of a disadvantaged minority and it is one of the few paths of advancement open to him. He seems likable enough and the readers' sympathies remain largely with him as he becomes as assassin, gains skills and authority, makes powerful friends.

Reading in publication order -- not so much with the sympathy. Vlad is basically a crime lord, running a territory for House Jhereg, which is similar to the mafia. He is a jolly enough fellow and has his own code of honor, but he also has no compunction about having a random woman murdered because her boyfriend was overheard gossiping. Pretty much innocent gossip, too, not mafia Jhereg secrets that he should have known were dangerous. His friends also have virtues -- usually loyalty or commitment to keeping their oaths, very medieval -- but they are certainly not the "good guys". Vlad mentions in passing of Morrolan that "he has been known to sacrifice entire villages to her Agyar I know that he can portray this sort of moral ambiguity far better if that is what he wanted to do.

On a less abstruse level, reading in publication order seems like it will make a lot of the "later" books which deal with earlier events rather anticlimactic. For instance, when I originally read Yendi without having read Jhereg, I did not know that Vlad was going to end up marrying Cawti, who is introduced in Yendi. But if you read in publication order they are married when it starts, rendering that subplot completely anticlimactic. There is no tension when someone tries to murder Vlad in Yendi because we already know he will be fine.

Or maybe this is just not as fun because I'm a grown-up and read more critically.
Tweet